One Lyre for humanity

When the Baghdad Museum was looted and vandalized in April 2003, most of us could only stand by and watch in horror as part of the world’s history and humanity was lost. And after the initial shock wore off, and for some it never did, some great people got to work right away to restore what was lost.

I’m unfortunately not one of those people, but I’m going to tell you about two such men, one, a pioneer of Mesopotamian archaeology, and the other a musician with passion, both of who do in the most legitimate way possible qualify as members of that elite of humanity.

Before I do that, I will tell you about this, the Golden Lyre of Ur:

The Golden Lyre of Ur on display at the Baghdad Museum before the looting.

Originally excavated with more than a dozen other stringed instruments in 1929 by British archaeologist, Sir Leonard Woolley from the Royal Graves of Ur, the Golden Lyre of Ur was found in the grave of Queen Pu’abi. Queen Pu’abi is believed to have died in 2600 BC.

Queen Pu’abi’s crowned and jewel-adorned body was found along with 74 other bodies, 68 of who were female. The males and females found were all wearing the same type of clothing and each holding a vessel believed to have contained the poison they all drank for their mass suicide. This was part of their duty to their queen as sacrificial victims.

One of those unfortunate females was the Golden Lyre player, whose hand bones were found placed over where the strings would have been.

Sir Leonard Woolley holding a Lyre like the one found in Queen Pu'abi's grave.

The wooden sections of the Golden Lyre had decayed over the centuries, so Woolley used careful methods to avoid damaging the ancient find any further, which aside from wood, was also made of gold, lapis lazuli, gulf shell, pink limestone and bitumen. Before removing the fragile ancient find from the ground, Woolley poured plaster of Paris to fill in the deteriorated parts of the wood and then covered the whole thing with strips of waxed cloth to hold it all together.

If it weren’t for Woolley’s care in excavating such a fragile and ancient piece of humanity’s history, I definitely would not be sitting here writing about the details of the Golden Lyre of Ur, and the wonderful project I’m about to tell you about might not have ever been completed, or even thought of.

Up until Andy Lowings, a harp enthusiast from England, felt a calling to recreate the Golden Lyre of Ur using all the materials used all those thousands of years ago, the instrument was unplayable. And now, after the looting of the Baghdad Museum in April 2003, the Golden Lyre of Ur is not even displayable, as it lies in broken pieces. 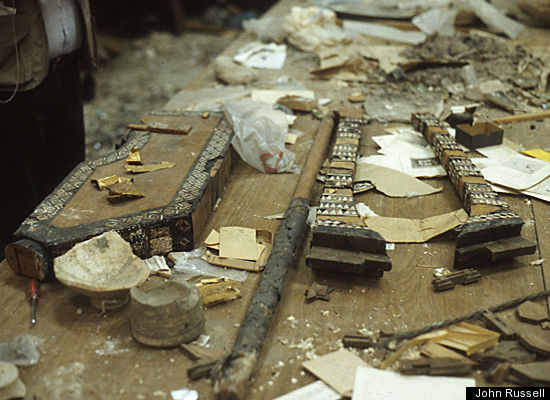 The Golden Lyre of Ur after the looting of the Baghdad Museum in 2003. Lowings said at a conference at the Library of Congress in March 2009: "It was vandalized and found broken in the car park."

Enter Lowings and an amazing network of people who care about the history of humanity formed a partnership of sorts that kept growing in size and contributions from universities across the globe, South African gold mines, the Royal goldsmith of Prince Charles, and even the British Royal Air Force, among other unlikely contributors– and a playable and as-close-to-authentic-as-possible Golden Lyre of Ur is now in existence.

You can read the details of how the Sumerian scenes were etched onto the Lyre with lasers and laser engineers at the University of Liverpool in this document.

The project began in 2003, shortly after the original Lyre was destroyed, and Lowings wanted every detail to be recreated, from the golden bullhead, to the Iraqi cedar wood used in the body of the Lyre. The project took three years to complete, and a labor of love–a love of music, of history, of humanity.

You can watch and hear Andy Lowings describe the three years of The Golden Lyre of Ur Project in his warm and compelling way of speaking in this video, recorded at a seminar at the Library of Congress in Washington DC, in March of 2009.

Listen to this piece of music from the strings of Lowings’s reconstructed Golden Lyre of Ur and you might want to ask Lowings to bring this instrument (valued at $50,000) to your next educational event:

Today, Lowings’s project has brought with it a CD of the Lyre’s music and a group that will go wherever they are needed to perform and educate the world about the cradle of civilization, and one of the many tools it gave us to explore our humanity.

Posted by ALL MESOPOTAMIA on November 11, 2011 in Music, Sumerian

← Beer, beer and more beer!
One man’s green thumb and thirst for power →

7 responses to “One Lyre for humanity”