Standard of Ur Banquet scene. (Source)

The Greek historian Herodotus said that when the city of Babylon fell to the Persians in 539 BC, what King Cyrus and his armies found behind its walls were Babylonians feasting. The Bible says the same about the event, which served to peg the very name of that great city to excessive luxury.

I started with the fall of Babylon, but luxurious feasts and banquets had been a part of Mesopotamian culture from the time of the Sumerians, the ones who started it all.

We feast today to celebrate all things happy, from weddings to religious holidays. Mesopotamians were no different.

The famous Standard of Ur (pictured above) contains a rather detailed Sumerian banquet scene in which servants bring food and drink to seated figures, one of them higher and larger than the rest, with musicians performing. There are also cattle being led in to be prepared for the feast, which we know is a celebration of a war victory, thanks to an accompanying war scene. (Source)

The amount of detail in the Standard of Ur and other art depicting a feast or a banquet tells us of the significance of these rituals that continued to be important through the centuries.

Another depiction of a feast is found on Assyrian relief from King Ashurbanipal’s palace that dates back to the 6th Century BC. The detail of the “Garden Party” relief is incredibly intricate. It shows King Ashurbanipal (668 – 627 BC) reclining on a chaise-longue with his wife seated next to him as servants bring food and drink and play music, all in celebration of his victory against the Elamite kingdom.

What makes this feast depiction so special is not only its intricate detailing, but that it also serves as a medium for gloating. Ashurbanipal’s ruthlessness is something that is echoed in most all of his depictions, and in this relief it is manifested in hanging of the defeated Elamite king Teumman’s head hanging from a nearby tree (far left tree, right in Ashurbanipal’s line of sight).

There were other occasions for celebratory feasting by kings in Ancient Mesopotamia, besides war victories and gloating. The Assyrian king Ashurnasirpal II (883 – 859 BC) held a huge banquet to celebrate the inauguration of his new palace in 879 BC.

But kings weren’t the only ones who feasted. So did ordinary people. For example, Assyrians, presumably the concerned merchants, celebrated the arrival of new trade goods by having feasts in their homes. (Source).

What was on the menu?

When King Ashurnasirpal II celebrated his palace’s inauguration, he spared no expense in feeding his 69,574+ guests:

The guests at this banquet (which was boasted about in an inscription put on a stele) were local as well as foreign dignitaries and workers. The gods were also considered guests at such extravagant banquets, and that meant part of the food was designated for the gods. For the goddess Ishtar alone Ashurnasirpal II designated some 200 heads of cattle.

To drink, Mesopotamians served beer and wine at their feasts. They also performed toasts in honor of their host. 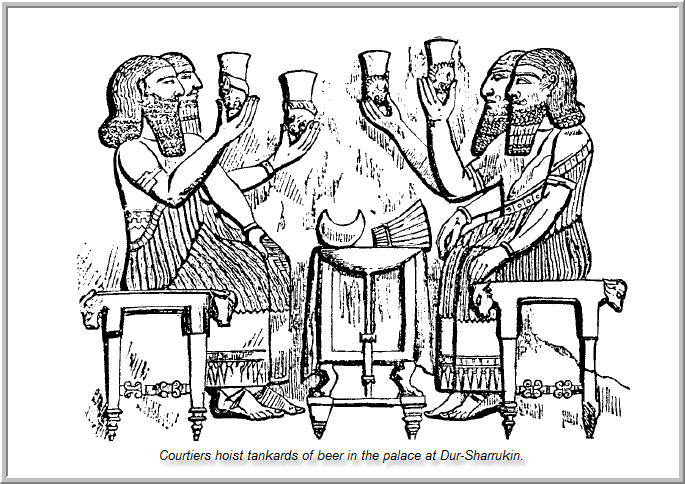 Here is a description of a scene in which nobles offer a toast to their king:

“…the nobles sat at tables of four. In front of them was placed a dish of food as they toasted the king, raising a rhythm (cornucopia-shaped drinking cup) with a base in the shape of a lion´s head.” (Source)

Finally, are you wondering just how flavorful a Mesopotamian feast might be? At History Tastes Like This, a blog about recipes from olden times, an attempt at a Mesopotamian Beef Stew recipe is described, and it sounds like a Mesopotamian feast would’ve made your taste buds sing. Maybe you could have yourself a different kind of feast this holiday season.

Posted by ALL MESOPOTAMIA on November 22, 2012 in Holidays

One response to “Feasting in Mesopotamia”